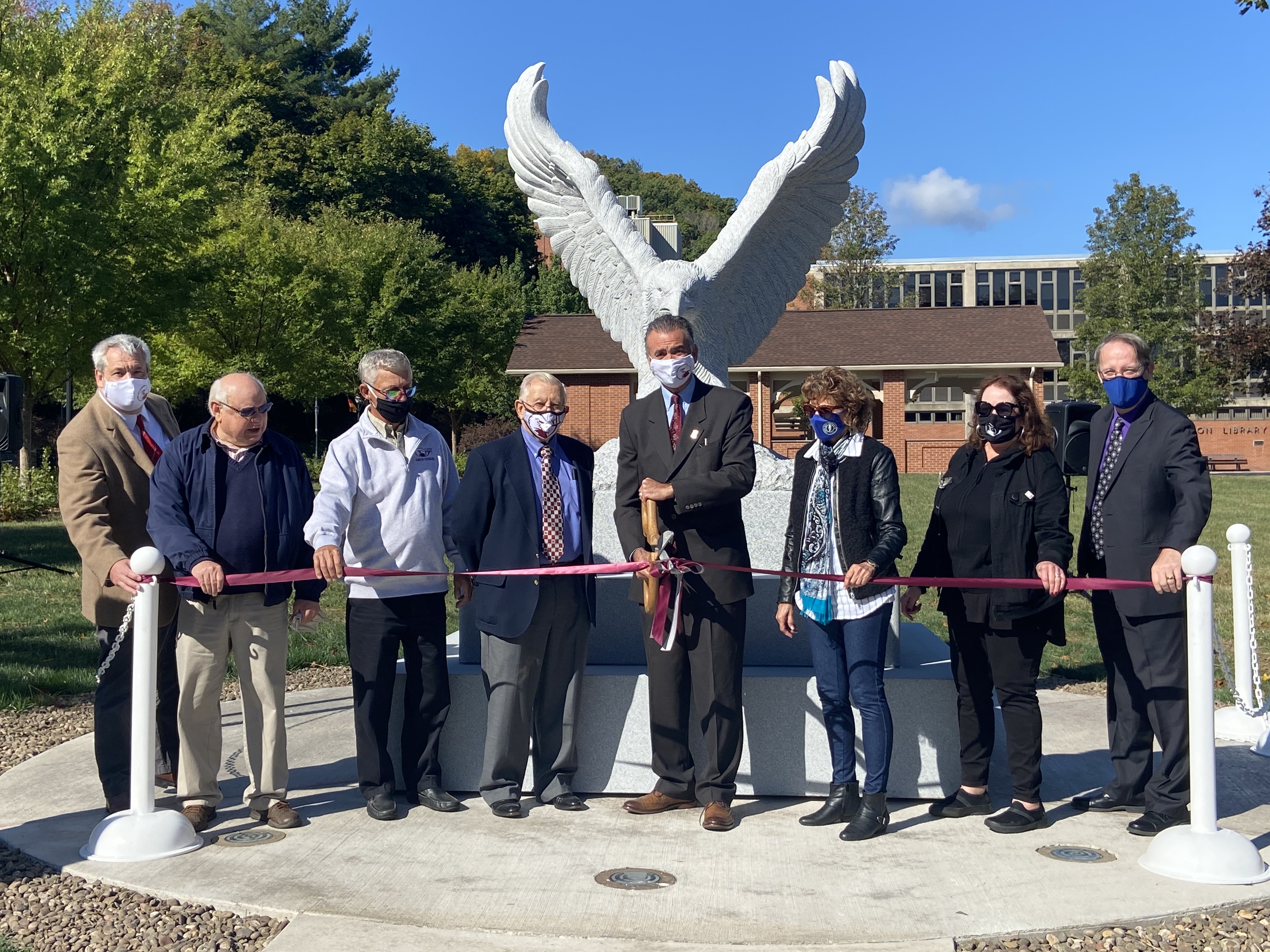 On Saturday, Oct. 3, Lock Haven University held a dedication ceremony for its new Bald Eagle Statue. The statue will be a focal point in the university’s Poorman Commons. It was funded as a gift to the university by alumni from the Class of 1966.

The private ceremony was attended by about 30 people, including LHU president Robert Pignatello, alumni from the Class of 1966, members of the LHU Foundation Board of Directors and the LHU Alumni Association Board of Directors, and Mary Coploff from LHU’s Council of Trustees. Lock Haven Mayor Joel Long was also in attendance.

“Our new grand bald eagle is a beautiful sight and will be an enduring symbol for our institution as we dedicate it in our 150th year,” Pignatello said. “It is my hope that this statute will symbolize our resolve and determination to maintain our great legacy, who we are and what we have meant to our alumni, current and future students, people who work here, and the local community who depends on us. This statue is made of Granite.  It weighs 36,000 pounds. It’s not going anywhere. It’s here to stay and so are we.”

Led by 1966 Lock Haven State College alumnus Ron Bowes, the Class of 1966 began talks of making a class gift in 2016 following their 50th class reunion. It was fellow 1966 alumnus Sharon Zegalia who came up with the idea of a bald eagle statue.

The meticulously-carved bald eagle boasts a six-foot wingspan, exceptional hand-sculpted detail and weighs in at approximately 18 tons. It is centrally located in the university’s commons right along North Fairview Street for students, alumni, employees and passersby, alike.

“We wanted to do something lasting and meaningful, and now the bald eagle has its permanent perch,” Bowes said. “This bald eagle will be on campus for a long time. It’s part of our legacy. It’s a great source of pride for me. I think it will be for others too.”

Lock Haven University’s main campus is located on the West Branch of the Susquehanna River in the scenic mountains of Pennsylvania. The university offers 49 undergraduate majors and certifications with 47 minors and five graduate programs.

LHU is a member of Pennsylvania’s State System, the largest provider of higher education in the Commonwealth. Its 14 universities offer more than 2,300 degree and certificate programs in more than 530 academic areas of study. Nearly 520,000 system alumni live and work in Pennsylvania.